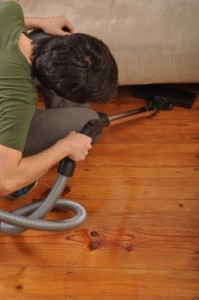 It’s Friday. You might be looking forward to relaxing, playing and sleeping late this weekend. It’s the end of the work week, right? Wrong. Your work doesn’t end when you leave your job. Like most Americans, you’ll likely be working a second shift at home. Especially if you are a woman.

“Women’s second shift” is a term coined by Arlie Hochschild in 1989 that describes the work people routinely do at home, after their paid work outside the home finishes. Guess what most women do on our so-called second shift? Housework. Cleaning, washing, vacuuming, tidying. Not at all how most people want to spend their leisure time, especially on the weekends.

When Hochschild wrote her book on the subject in 1989, women were just beginning to enter the workforce in large numbers. Yet, even with their newfound jobs, women were still doing more housework than men. This unequal pattern persists today, despite the large number of women with jobs outside the home.

One way for women to balance the housework is to persuade their husbands/boyfriends/partners to do more more of it. Good luck with that. Another way is to hire out the housework to a professional cleaning company, like Master Clean. After all, housework is work, whether you’re a woman or a man, paid or unpaid. Hire a professional, and have more leisure time for what you want to do on the weekends.

Photo by artur84, courtesy of freedigitalimages.net